Autonomous Emergency Braking (AEB) and FCW are necessary features if a new passenger vehicle is to achieve a five-star Euro NCAP rating. By 2018 AEB and Lane Departure Warning systems will be mandatory for all new commercial vehicles throughout Europe (UNECE Regulation on AEBS steps 1 and 2).

VBOX equipment provides positional accuracy to 2cm along with a real-time output of the relevant parameters required to develop such systems. When used in conjunction with Euro NCAP-approved steering and pedal robots, the VBOX 3i RTK (VB3iSLR) outputs data that meets the requirements set out in the NCAP assessment.

For a list of all standard GPS data channels and accuracies that are also measured please refer to the VBOX 3i RTK product page.

Meeting the Euro NCAP standards successfully requires the use of steering and pedal robots to maintain accurate conditions for speed, drive line, distance and braking as laid out in the test requirements.

VBOX equipment can be used with officially approved robots manufactured by providers such as Anthony Best Dynamics and VEHICO to achieve the necessary level of consistency, essential when conducting such tests.

The second shows a similar test, but with the speed and separation being controlled by the VBOX and brake/acceleration robot.

As you can see, the automated system achieves the correct speeds and separation in substantially less distance (485m) compared with the human controlled test (1680m). By using a robot to perform such tests, it also ensures that once the desired speed and separation have been reached the pressure applied to the brake pedal of the target vehicle does not exceed 0.3g of force. This reduces the likelihood of an error occurring and saves the manufacturer time in having to repeat the test.

Although using a single robot in the VUT stills leaves the test open to human error, it greatly simplifies the process with the engineer in the towing vehicle simply having to drive in a straight line and not amend any path variations. Recent advances in path-following technology have also proven that by using the “look-ahead path following” capabilities of the combined systems means that if the human-driven towing target car deviates from a straight path, the VUT can track it accurately and maintain the minimum lateral deviation necessitated by the test. This therefore reduces set-up time, equipment complexity and cost, by only requiring one steering robot. 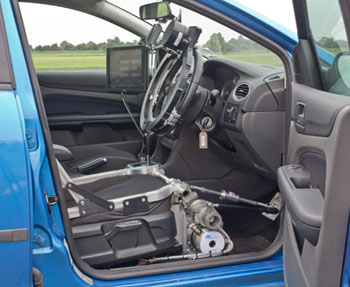 The NCAP protocol’s test parameters for AEB are hard-coded into the VBOX Test Suite software, and all the relevant channels are automatically created and logged during a test: subject and target vehicle speeds, relative distances between them, lateral deviation, yaw and steering wheel velocity.

VBOX Test Suite AEB processes the data according to the boundaries set out in the Euro NCAP protocol. Every run clearly shows whether each test condition is within tolerance, and a pass/fail for the test as a whole.

This level of automation results in a significant reduction in post-processing work as well as the time already saved on track. 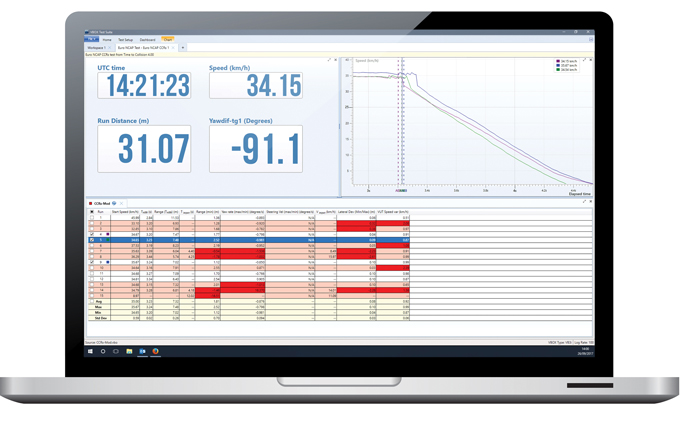 Communicating via radio the VBOX systems are able to display live readings of speed, yaw rate, longitudinal range and the all-important lateral range (the most difficult criteria to fulfil to NCAP standards) – with user configurable thresholds – so that the vehicle-under-test driver has the ability to maintain a consistent path. This immediate display of results also effectively allows engineers to gain instant pass/fail feedback, greatly speeding up the development process and reducing costs.

RELOCATE THE VBOX TO THE EVT

Under EURO NCAP test recommendations the measurement system (VBOX) should be placed in the towing car, but due to the position of the EVT – at the end of a 26 m towing rig – its lateral position can differ substanstially. This could be caused by simple factors like worn rollers, road camber or side winds, that can result in the +/- 10cm lateral range tolerance outlined by NCAP being exceeded and thus invalidating the results. The solution is to mount the VBOX inside a secure Peli case on the rear of the EVT itself. This ensures that the measurements taken by the VBOX accurately reflect the true position projected by the tow vehicle ahead.

When used in conjunction with Video VBOX or VBOX HD, the measured parameters can be graphically overlaid in real time onto the recorded video, providing a clear visual reference to the performance of the test.

Graphical overlay is totally user configurable and can be easily altered to present relevant information according to the tests being conducted.

It is now possible to ‘map’ the shape of vehicles using a survey pole, antenna, and VBOX Manager. Up to twenty-four points around the vehicle bodies can be surveyed, and the ‘shape’ of each car can be stored for later use. As the test is conducted, the distance of the closest contact points between the vehicles is calculated to +/-2 cm accuracy, automatically switching to the nearest contact points as they change with the car’s relative positions.

This allows for multiple procedures to be completed without having to reconfigure for individual contact points – such as moving from right rear to left rear flank during blind spot testing. This video demonstrates how the system works:

By substituting the DGPS Base Station with a specially configured VBOX 3i Dual Antenna with RTK, our MOVING BASE test setup allows users to test and verify active safety systems outside the test track.

If the vehicle carries the AEB / FCWS operation data on its CAN Bus, this can be simultaneously logged (and displayed in video if a VBOX video logger is also being used) alongside that of the GPS data, giving you an exact comparison between relative vehicle position and onboard strategy data.

If you cannot use the vehicles’ own CAN system, an AVAD3 audio & visual detector from DTC Solutions can be used alongside VBOX to record when an ADAS system has become active. The AVAD3 is capturing acoustic and optical alerts and signals generated by the vehicle’s advanced driver assistance system. It produces a CAN or digital signal when recognising changes of the shapes and colors of defined icons or when audible signals are identified. The output of the AVAD3 can then be used by the VBOX to log the exact moment the vehicle safety message is displayed to the driver.

Blind Spot Detection testing and validation can be conducted on the test track using a static DGPS Base Station, or via the Moving Base solution. Depending on the test requirements, you can choose between three VBOX system bundles. 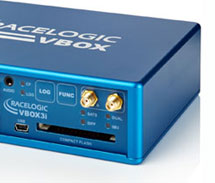 Each RLVB3iSLR logs up to 64 channels simultaneously (excl. standard GPS). 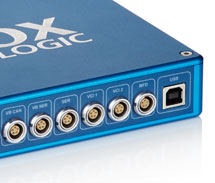 VBOX CAN Hub
The RLVBCANHUB allows for additional external modules to be connected to a VBOX 3i. Its footprint is the same as the VBOX 3i, so it can sit neatly underneath. 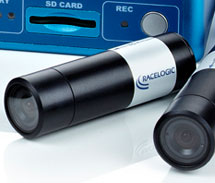 Video VBOX Pro (optional)
When used in conjunction with Video VBOX or VBOX HD, the measured parameters can be graphically overlaid in real-time onto the recorded video. 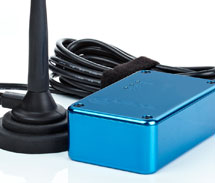 There are a variety of telemetry systems available, employing a range of frequencies.

Tripod for GPS Antenna
The VBBSTRIPOD2 enables the Base Station GPS Antenna to be mounted at a suitable height, at a non-permanent track side location. 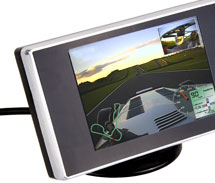 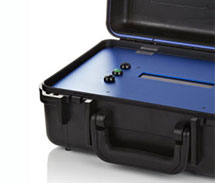 DGNSS Base Station RTK
Enables a positional accuracy of ±2cm.

The RLVBBS4RG comes with antenna and is able to transmit RTCM, CMR, RTCMV3 or RL proprietary (2cm) correction messages via radio. 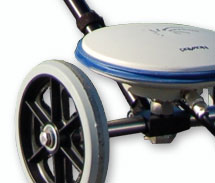 Survey Trolley (optional)
The Survey Trolley Kit allows for the accurate surveying of a lane edge, necessary when performing ACC tests along a curved lane. 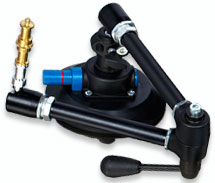 VBOX systems are suitable for the following test scenarios: 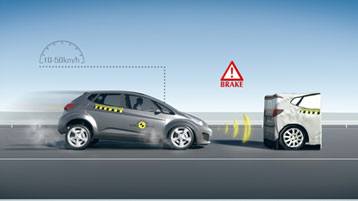 Instead of a target vehicle the Euro NCAP soft target (EVT) should be used (see picture).

The subject vehicle follows a soft target (EVT) towed by another vehicle, with a range of closing velocities.
Once the test conditions are met, the towing vehicle brakes at a constant deceleration whilst the test vehicle’s Autonomous Emergency Braking (AEB) system should detect this and apply the brakes.

In order to perform this procedure efficiently, robots should be used. VBOX test systems are compatible with ABD steering and pedal robots, and VEHICO systems.

The test starts when the TTC is 4s and the SV and EVT have been accelerated to the specified test speed. Test is valid when the below conditions are met.

The test ends when the SV’s speed is 0 km/h, smaller than the speed of the soft target or there has been contact between SV and soft target.

This test evaluates the ability of the FCW function to detect a stopped lead vehicle. In order to pass the test, the FCW alert must be issued when the time-to-collision (TTC) is at least 2.1 seconds.

The FCW system must satisfy the TTC alert criteria for at least five of the seven test trials.

The subject vehicle (blue) follows the target vehicle (red) at a constant time gap. The test evaluates the ability of the FCW to recognise a decelerating lead vehicle and to issue an alert to SV driver in a timely manner.

In order to pass the test, the FCW alert must be issued when the time-to-collision (TTC) is at least 2.4 seconds.

The test evaluates the ability of the FCW to recognise a slower lead vehicle being driven at a constant speed and issue a timely alert.

In order to pass the test, the FCW alert must be issued when the time-to-collision (TTC) is at least 2 seconds.

Determines if the FCW system detects a test target when it’s in the system’s detection range and measures the separation when it’s in measurement range.

Determines if the FCW systems issues a warning at the distance it states to do it.

Involves two or more obstacle vehicles and determines whether the FCW system is able to identify the (closest) vehicle in the subject vehicle’s trajectory.

The subject vehicle follows two target vehicles at the maximum speed the FCWS is capable of operating. The nearer target vehicle shall not mask the other.

The test is successfully fulfilled if the subject vehicle has produced a warning.

Two vehicles (red/ green) travel alongside at the maximum speed the FCWS is capable of operating. The spacing between the longitudinal centrelines of the cars is 3.5m ± 0.25m.

First the forward vehicle decelerates (green). Then, the target vehicle (red) decelerates until it’s in the detection range of the subject vehicle’s FCWS.

The test is successful when the subject vehicle issues a warning signal for the second scenario and doesn’t react to the first.

The same test is conducted on a circle or a sufficient part of a circle with a curve radios specified by the ISO systems classifications. 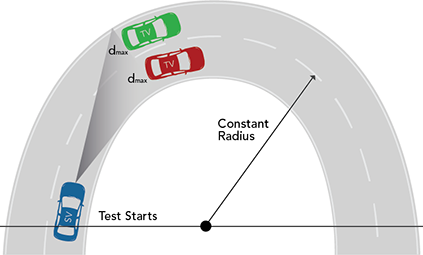