Tyres need to be able to perform on a range of terrains in all weathers. Manufacturers therefore need to recreate a variety of dynamic tests during the tyres development cycle to verify its performance. 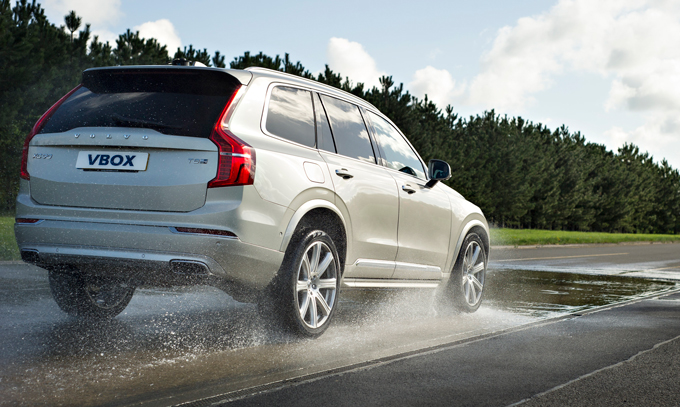 In addition to this is the desire to prolong tyre life cycles and improve braking performance. With enhancements in tyre compounds and constructions getting smaller each year, manufacturers now need the ability to accurately measure changes.

VBOX is a powerful data acquisition system that can be used to perform a wide variety of tests. It is easy to set up, quick to use, and can provide measurements at up to ±2 m positional accuracy – allowing engineers to plot even the smallest improvements in performance.

It has the ability to be connected to a range of input and output modules, and allows for test data to be viewed quickly and easily using a laptop or tablet PC – reducing the time needed to analyse results.

A laptop or tablet PC running VBOX Test Suite can be used to monitor the measured parameters in real time, either by a serial, USB, or Bluetooth connection.

This flexible and powerful package also allows for detailed post processing of the logged data in sync with any video footage recorded by a Video VBOX.

The software is able to process both live serial data and recorded VBO files in order to generate results from either brake trigger or deceleration tests. This allows customers to perform multiple brake stop tests and view the results in a useful format.

This software has been developed on conjunction with brake test engineers to reduce test track time and simplify analysis.

Video integration enables engineers to have a graphical representation of the test over live footage, which adds a further dimension to brake testing.

Most tyre manufacturers around the world use the VB3i 100Hz GPS logger to measure of braking distance, with the addition of an IMU04 system to counteract the lever arm effect for speed triggered measurements, or in areas of low GPS visibility.

WHAT EQUIPMENT DO I NEED?

VBOX can be used to accurately monitor performance for a range of tyre tests.

A very useful way of comparing the performance of a tyre is to carry out a number of brake stops with an ABS equipped vehicle. By using ABS it means the stopping distances are repeatable, making the tyres performance results directly comparable with other compounds.

The test is usually performed between two set speeds during the linear stage of the brake test in order to remove the response time of the braking system. For example, if the brakes are applied at 110 km/h, the brake test could start at 100km/h and finish at 15kmh; this eliminates the first and final part of the brake stop which is less repeatable.

For comparison with other compounds and constructions, the brake stops needs to be measured with a high accuracy, preferably within a few centimetres. RACELOGIC’s VBOX 3i high accuracy data logger can measure the distance consistently to ±1.8cm, and is quick and easy to fit. By using the GPS heading as well as the velocity, you can calculate the deviation from the centreline to within 2cm.

An important characteristic of a tyre is the speed at which it will begin to aquaplane. There are two main tests which are used in order to determine this speed. The first is in a straight line, and the second is around a corner.

The car accelerates from a standstill with one side of the car running with the wheels in a shallow channel filled with water. When the aquaplane threshold speed is reached, the driven wheel in the water channel will start to slip, and by comparing the speed of this wheel with the overall vehicle speed obtained by GPS, this speed can be captured.

This test is then repeated a number of times in order to obtain an accurate and repeatable result. The challenges in this test are to calibrate the wheel speed inputs and relate these to the GPS vehicle speed. In order to simplify and automate this process, RACELOGIC can supply dedicated aquaplane software which carries out the calibration and collection of the test results.

The vehicle drives into a flooded section of track whilst turning on a prescribed radius. This test is carried out at different speeds, until the aquaplane threshold is reached, at which point the vehicle will start to slide upon entering the bath.

By using a GPS based VBOX, the vehicle speed and lateral acceleration can be monitored, and the aquaplane threshold can be measured very accurately.

A useful measurement in this test is the steering angle, which can either be obtained from CAN or by using a steering angle sensor connected directly to one of the analogue input channels.

RACELOGIC’s aquaplane windows software is designed to work with a VBOX for easy and accurate aquaplane testing.

Circuit tests are often used to determine the dynamic performance of the tyre. During these tests oversteer and understeer characteristics of the vehicle are monitored, along with the lateral and longitudinal accelerations generated and overall lap times.

By using the VBOX 3i Dual Antenna, all of these values can be measured using GPS.